The history of Edinburgh 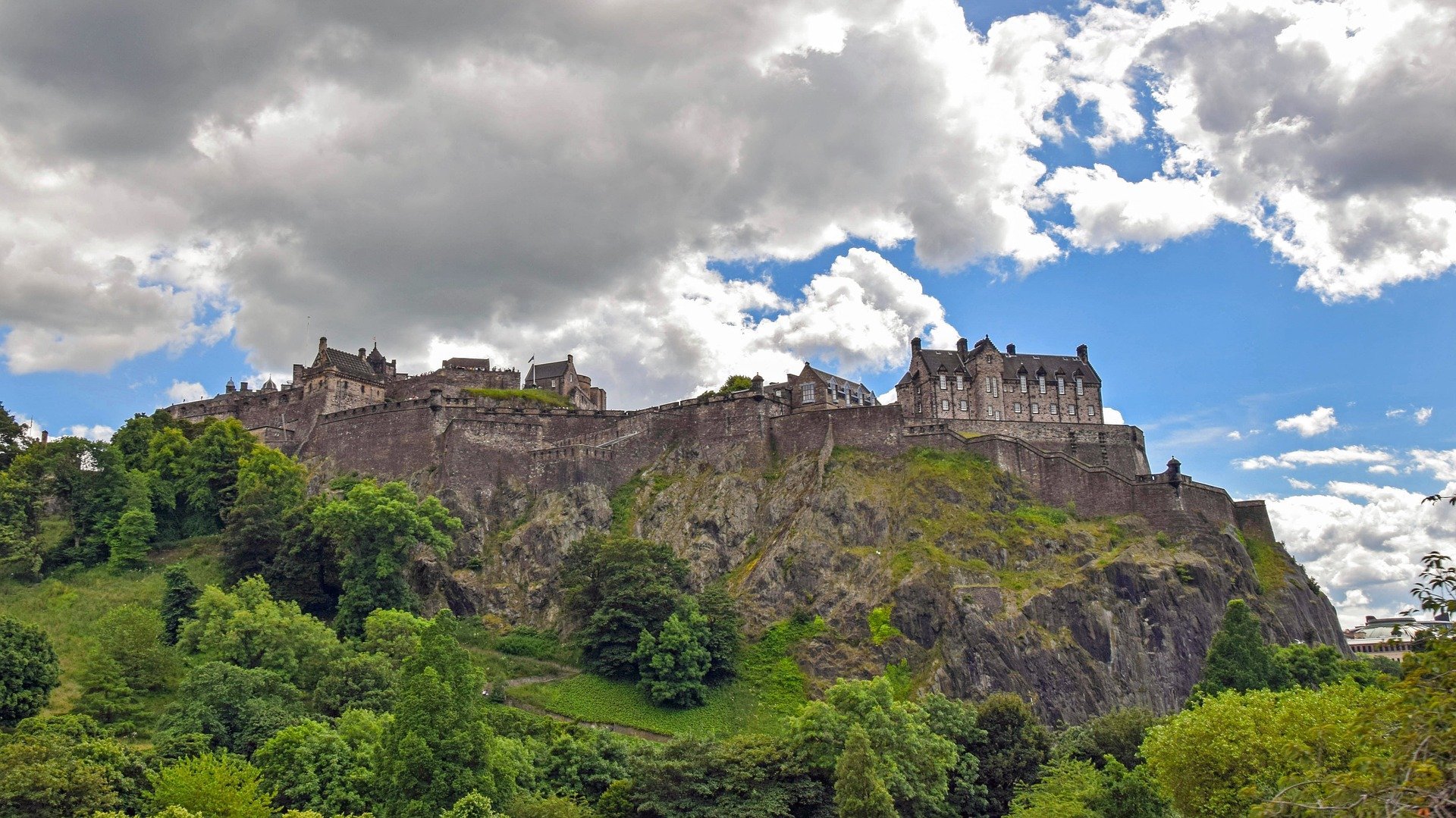 When the Roman “Governor of Britain” Agricola advanced North in AD79, he encountered the Celtic tribe of Votadinii controlled the Forth River valley and based themselves at what is now probably Edinburgh Castle.  Although they fought, and defeated the Pictish leader Calgacus at Mons Graupius in AD84, the Romans never mastered Caledonia and by 211 had retreated behind Hadrians wall, about a hundred miles to the south. By 410 they had left Britain for good.

By the sixth century four kingdoms had developed in what is now Scotland:
the Picts in the north, the Scots in the far west, the Britons in the west and the Angles in the south-east/Northumbria.  Edinburgh marked the northern boundary of the Angle kingdom.  For the next two of hundred years these four kingdoms struggled, beset by Viking raiding parties, until in the 9th century the King of Dalraida, Kenneth MacAlpin, fought his way to something like a united Scotland. His Grandson, Duncan I, became the first King of Scotland in 1035.

In AD 973 the English king Edgar the Peaceful formally granted Lothian to Kenneth II, King of Scots, which was a key event in assuring Scottish rule over Lothian. By the early 11th century the Scottish hold over the area was secured when King Malcolm II ended the Northumbrian threat by his victory at the battle of Carham in 1018.

Although initially Scottish rulers tended to base themselves further north across the Forth, King Malcolm III (died 1093) built his castle at Edinburgh, and his wife Queen (Saint) Margaret built a chapel within its walls – now the oldest building in the city.  Her son, David I built the Abbey at Holyrood, a mile to the East along “The Royal Mile” and established the town of Edinburgh as one of Scotland’s earliest royal burghs, protected by his royal fortress, on the slope below the castle rock. The Castle and the Abbey became the anchor points of Edinburgh and a thriving town grew up along the road between them, connected to Leith, Edinburgh’s port.

By the end of the 1500’s it was established as the Capital of Scotland and, growing in population, the inhabitants chose to build high houses close to the protection of the Castle: high tenement buildings most of which can be seen to this day.  In 1560, at a time when Scotland’s total population was an estimated one million people, Edinburgh’s population reached 12,000, with another 4,000 in nearby separate jurisdictions such as Canongate and the port of Leith (which are both now part of present day Edinburgh).

The town played a central role in events leading to the establishment of Protestantism in the mid-16th century Scottish Reformation. During her brief reign the Catholic Mary, Queen of Scots, who returned to Scotland from France in 1561, faced hostility from protestant nobles and churchmen fearing that her personal faith and claim to the English throne, if successful, might lead eventually to a return to Catholicism. Although she was initially welcomed by the general population, the tragic chain of events that unfolded during her residence at Holyrood Palace, including the murders of her secretary and consort, forced abdication in 1567. Through his preaching at St. Giles calling for her execution as an adulteress and murderess, one of the town’s leading Protestant ministers, John Knox, inflamed popular opinion against Mary. After her arrest at Carberry, she was detained briefly in the town provost’s house on the present-day site of the Edinburgh City Chambers before being incarcerated in Loch Leven Castle. The civil war that followed her escape from imprisonment, defeat at Langside and flight to England ended with the final surrender of her remaining loyal supporters in the “Lang Siege” of Edinburgh Castle in 1573.

When King James VI of Scotland inherited the throne of England in 1603, Edinburgh ceased to be the principal site of the royal court, although it did continue to have its own Parliament.

In the 17th century, Edinburgh was still enclosed within 140 acres by the defensive walls, built mainly in the 16th century as protection against possible English invasion. Due to the restricted land area available for development, houses continued to increase in height to accommodate a growing population. Buildings of 11 stories were common and these have often been described by later commentators as precursors of the modern-day high-rise apartment block.   However Edinburgh was one of the most densely populated, overcrowded and insanitary towns in Europe Daniel Defoe’s remarked, “…though many cities have more people in them, yet, I believe, this may be said with truth, that in no city in the world [do] so many people live in so little room as at Edinburgh”.

A further striking characteristic of Edinburgh society in the 18th century, was the close proximity and social interaction of the various social classes. Tradesmen and professionals shared the same buildings.

As described earlier, the city changed substantially after the Act of Union in 1707 – Parliament ceased in Edinburgh and, although initially the union was opposed by many Scots and there were riots in Edinburgh, the city prospered.

From the late 1740s onwards, Edinburgh began to gain an international reputation as a centre of ideas, especially in philosophy, history, science, economics and medicine. The Faculty of Medicine at the University of Edinburgh, formed in 1726, soon attracted students from across Britain and the American colonies.  The Royal Society of Edinburgh, founded in 1783, became Scotland’s national academy of science and letters.

Influential visitors to Edinburgh included Benjamin Franklin of Philadelphia who came in 1759 and 1771 to meet with leading scientists and thinkers.  Thomas Jefferson, writing to the philosopher Dugald Stewart in June 1789, declared that, as far as science was concerned, “no place in the world can pretend to a competition with Edinburgh”.

Representative of the far-reaching impact of the Scottish Enlightenment was the new Encyclopædia Britannica, which was designed in Edinburgh by Colin Macfarquhar, Andrew Bell and others. It was first published in three volumes between 1768 and 1771, with 2,659 pages and 160 engravings, and quickly became a standard reference work in the English-speaking world.

This period of energetic building during the “Enlightenment”, which lasted into the 1800’s, and the development of the New Town has created one of the most architecturally beautiful cities in the world.  However, by 1821, Edinburgh had been overtaken as Scotland’s largest city by Glasgow which had benefited from the Atlantic trade with North America and had become a major manufacturing centre of the British Empire.

In the meantime the Old Town continued to decay into an increasingly dilapidated, overcrowded slum with high mortality rates.  This was especially true where the sub-division of tenements offered the cheapest lodgings in narrow alleyways that formed the backdrop to the infamous ‘West Port Murders’ of Burke and Hare two Irish immigrants who sold the corpses of their 16 victims to Doctor Robert Knox as dissection material.

Major street improvements were carried out in the Old Town under Lord Provost William Chambers, and the Edinburgh City Improvement Act of 1867 initiated the transformation of the area into the predominantly Victorian Old Town seen today.  In contrast to the New Town, many of the buildings are in the mock-Jacobean architectural style known as Scots Baronial and is in keeping with the “medieval” character of the Old Town.

During the First World War, Edinburgh was bombed on the night of 2–3 April 1916. Two German Zeppelins dropped high explosive and incendiary bombs on, among other places, Leith, the Mound, Lothian Road, the Castle Rock and the Grassmarket. Eleven civilian deaths, numerous injuries and property damage resulted.  Owing to its comparative lack of industry, Edinburgh was not targeted during the Second World War although bombs were dropped on a few occasions between June 1940 and July 1942 in what appear to have been opportunistic attacks by bombers jettisoning their remaining load while returning from other targets. The city consequently emerged from the war almost completely unscathed.

Since the 1990s a new “financial district”, including the Edinburgh International Conference Centre, has grown mainly on demolished railway property to the west of the castle, stretching into Fountainbridge, a run-down 19th-century industrial suburb which has undergone radical change since the demise of industrial and brewery premises. This ongoing development enabled Edinburgh District to maintain its place as the second largest financial and administrative centre in the United Kingdom after London and financial services now account for a third of all commercial office space in the city. The development of Edinburgh Park, a new business and technology park covering 38 acres, 4 miles west of the city centre, has also been a key element in the District Council’s strategy for the city’s economic regeneration.

In 1998, the Scotland Act, which came into force the following year, established a devolved Scottish Parliament and Scottish Executive (renamed the Scottish Government since September 2007). Both based in Edinburgh, they are responsible for governing Scotland while reserved matters such as defence, taxation and foreign affairs remain the responsibility of the Westminster Parliament in London.